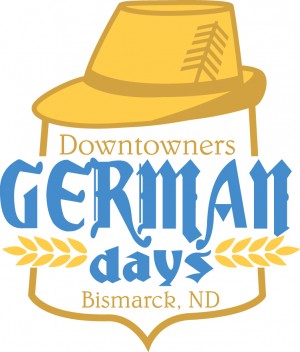 The Downtowners of Bismarck are launching a new annual event called German Days, scheduled for July 17-18, 2015 in Downtown Bismarck.  German Days will be a celebration of all things German, including German and Germans from Russia music, food, and beer.

Friday afternoon, Kinderfest will feature German storytelling, fairytales and activities for kids.  Staging will be set both days for authentic live entertainment including polka music, clogging, oom-pah music and activities.  Authentic German-styled beer will served along with traditional foods.

The community is encouraged to get in the spirit of Bismarck’s and North Dakota’s German heritage by wearing traditional German clothing such as lederhosen, dirndls, or other German celebratory garb as well as dance the polka.  Steins, clothing and other German items featuring Bismarck’s German Days will be available for purchase at the event.

The location of German Days will be the Depot parking lot along Main Ave between 4th and 5thStreets.  Access to Fiesta Villa Mexican Restaurant will remain open using the public sidewalks.

Hours of the event will be approximately 11am-11pm.  Downtowners staff are hoping to expand the event in future years and make it a flagship German celebration in Bismarck.

Bismarck was originally named Edwinton in 1872, however railroad leaders changed the city name to Bismarck in 1873, honoring German Chancellor Otto Von Bismarck in an effort to attract German settlers to the area.  German is currently the top ancestry of residents in Bismarck.